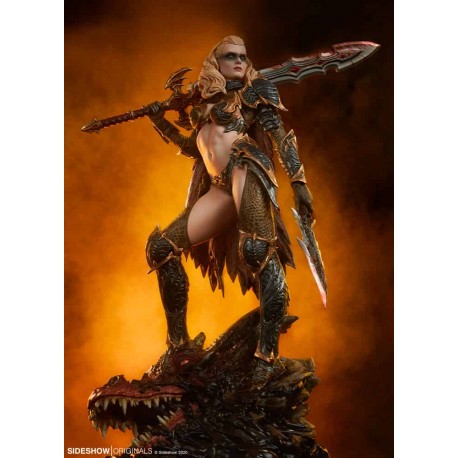 Sideshow presents the Dragon Slayer: Warrior Forged in Flame Statue, an original fantasy character who will become a living legend in your collection.

The Dragon Slayer: Warrior Forged in Flame Statue measures 18.75" tall, standing atop the desiccated remains of a slain red dragon. Murky corruption drips from its skull, relinquishing its hold on the dreaded beast, which has been partially stripped of its scales and horns to reinforce the hero's incredible armor. Victorious this day, the Dragon Slayer surveys the battlefield in search of more fiends to subdue.

The polyresin Dragon Slayer Statue is fully sculpted with intricate detail from head to toe, bringing fantastical action to every aspect of this original figure. In the fight against dragons, this warrior woman has armed herself with protective aspects harvested from her fallen foes- black and gold horn armor, scaled vestments, and a red dragonskin cape guard her from the flames and claws of these brutal beasts. Once in striking range, it is up to her serrated hunting knife and legendary greatsword, both freshly stained with dragon blood, to finish the deadly job. The Dragon Slayer's battle-hardened look is completed with fierce blonde braids and a stripe of smoky makeup across her eyes, her gaze stern as she faces down the most frightening creatures ever beheld by humanity.

Arm your collection for an epic battle and bring home the Dragon Slayer: Warrior Forged in Flame Statue from Sideshow Originals today!