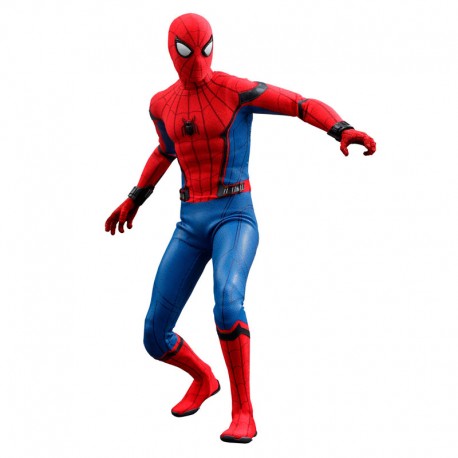 Making a debut in the Marvel Cinematic Universe, the young Spider-Man Peter Parker, portrayed by Tom Holland, first appeared in Captain America: Civil War. Followed by a series of incidents after fighting with the Avengers, he's fascinated with life as a superhero.

Sideshow and Hot Toys are thrilled to announce the sixth scale Spider-Man collectible figure based on the suit designed by Tony Stark in the highly anticipated blockbuster - Spider-Man: Homecoming!

The latest Spider-Man collectible figure is crafted in movie accurate quality that features a newly developed masked head sculpt with four pairs of interchangeable eyepieces to create numerous Spider-Man's expressions. The figure also includes another interchangeable head sculpt featuring the likeness of Tom Holland, a newly developed body, and Spider-Man suit in meticulous tailoring and great detail, a pair of magnetically attachable web-wings, a variety of spider-web shooting effect parts and accessories as well as a dynamic figure stand.

Accessories:
- One (1) Spider-Man mask (not wearable on figure)
- One (1) open spider web effect accessory
- Five (5) strings of spider web in different shapes and lengths, attachable to the web-shooters
- One (1) beige backpack
- One (1) pair of headphone
- One (1) Science textbook
- Two (2) piece of Spider Signal stickers
- Dynamic figure stand with Spider-Man nameplate and the movie logo