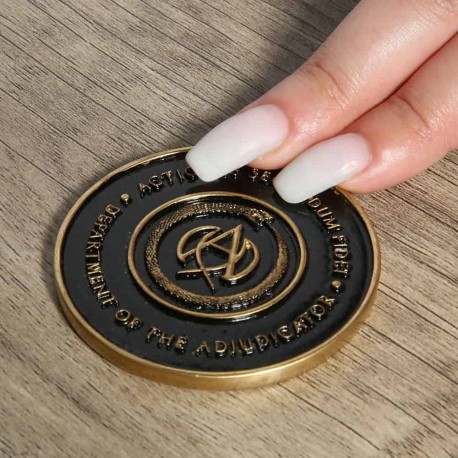 In the underworld of John Wick, it's the role of an Adjudicator to heal any fractures in the order of things. As a living, breathing extension of the High Table, the Adjudicator judges and arbitrates on their behalf.

The Adjudicator's medallion is their calling card, a symbol of authority that allows them all-access, smoothing the way for them to find the answers they seek.

Chronicle Collectibles is proud to bring you this replica of the Adjudicator's Medallion from the Lionsgate film, John Wick: Chapter 3 - Parabellum. Recreated from the screen-used prop and cast from the finest materials, the medallion's blackened surface features a golden Ouroboros surrounding the seal of the Department of Adjudicators, with the Latin precept, "Actiones secundum fidei" emblazoned above it.